Emily Caffrey was among the honorees at the 2019 College of Engineering Oregon Stater Awards on February 21, 2019, at Oregon State University (OSU). The OSU alumni honored at this event were the Hall of Fame honoree, Robert Yüksel Yildirim, five inductees into the Academy of Distinguished Engineers, and ten new members of the Council of Outstanding Early Career Engineers. Emily was recognized among the Council of Outstanding Early Career Engineers, reserved for Oregon Staters with fewer than 20 years of professional experience whose contributions have distinguished them as future leaders in their field or profession. 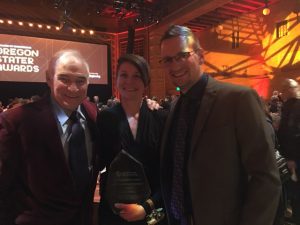 John Till, Emily Caffrey, and her husband Jarvis at the 2019 Oregon Stater Awards ceremony.